In 1973, in order to establish a design approach to the creation of a new City seal, several prerequisites were 1st determined. The seal should be: 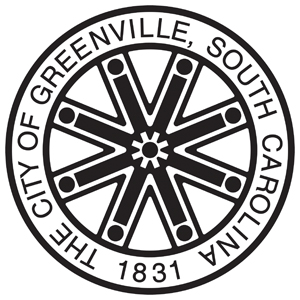 The concept of the design is based on three of the City's basic elements:

Careful attention was give the arrangement of these symbols in the design in order to provide still further symbolism:

Working together in the design as in our society, the elements of man, his natural resources, and his industry create the wheel of progress which symbolizes Greenville on the move today toward a better tomorrow.

This wording was taken from the Informal Minutes Of Greenville City Council. The City seal was adopted on March 20, 1973.